The Growth of Aperitifs, Liqueurs and Syrups and How They Can Make Your Business Special

Trends change quickly in the drinks market. With strong growth in aperitif, liqueur and syrup sales, the overall winner is the cocktail scene.

The market data figures are clear: people have been consuming less alcohol overall since around 2010. In fact, in pure alcohol terms (litres per head, per year) consumption is down around 15% in the hotel, restaurant, club, pub and bar (the on-trade, HoReCa) sector, whilst remaining fairly static in the off-trade. Yet those figures do not provide a clear enough picture if you’re in the hospitality business of selling drinks, so it pays to look more closely if you’re to optimise the commercial opportunities.

From London and Paris to New York and San Francisco, as well as cities across Asia, the sub-continent and Australasia, sales of ‘aperitifs’ are growing rapidly. It has a lot to do with younger drinkers opting for lower alcohol drinks over traditional, spirit-strength cocktails, itself partly fuelled by young people having a keen awareness of their social-media image, as much as wanting to stay more in control. At the same time, the need for a drink to deliver on flavour – to ‘satisfy’, in consumer terms – remains a key driver, and the goal continues to be to achieve this without the known flavour-enhancement that comes from what spirits producers call ‘mouth feel’, something which alcohol brings to the taste profile of any drink. 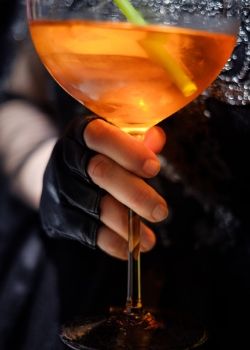 It’s certainly clear that the love of alcohol seen in earlier generations is being replaced to some extent by an ever-expanding number of ‘grown-up’ syrups, non-or lower-alcoholic spirits and soft drink concoctions that offer similar, if not the same, taste satisfaction. It’s amazing how imaginative you can be when you have syrups that run from caramel, chocolate, butterscotch, cinnamon and vanilla… to elderberry, zabaglione, and gingerbread… to lavender, lemongrass, and chipotle.

The market has also seen marked growth in the lower-in-alcohol, spirit-based aperitifs sector – the Aperols, Lillets and Martini Rossos of this world (each at roughly half the strength of regular spirits) – with an uplift over the last year of some 7.5%, yet this is from a small base, representing as it does a little over 2% of the spirits market as a whole.

At the same time, sales of liqueurs, a sometimes overlooked part of the spirits category, have risen to £1.2 billion, or more than 42 million bottles, not far short of a two-thirds rise in just over 12 months (cream liqueurs, on their own, rose by a third). This can largely be put down in part to a growth in Instagram-able cocktail culture, driven by examples shared on social media with consumers also keen to reproduce the drinks they’ve tried and seen in their own homes.

It’s certainly true that, whilst this growth is being reflected in a decline in high ABV spirits sales –  vodka falling 6%, brandy by over 1%, and rum by just under 1% in volume terms, it’s also true that the sales values of luxury spirits are actually increasing across the board because consumers are more and more choosing premium, ‘craft’ products as their spirit drinks of choice when consumed as an aperitif or pre-food cocktail.

In fact, there’s actually a continuing demand by bartenders, mixologists and their clientele for so-called ‘export’ and ‘cask strength’ spirits (47.3%, 50% ABV, and more) precisely because they deliver different taste profiles, and more forward flavours (and more of that somewhat intangible ‘mouth feel’). This ‘trend diversification’ by consumers to both higher and lower alcohol levels is also reflected in the same division between the growth in more bitter herbal liqueurs at the same time as sweeter, fruitier versions are growing, as part of an ever-broadening consumer taste repertoire.

So what do these strong growth trends mean to any business that works in the hospitality industry?

Bars cannot ignore the dynamic cocktail sector and the trends to low- and no-alcohol (NO-LO), as well as the move to premium and super-premium, ‘craft’ drinks. Today, pre-dinner cocktails have become an occasion in their own right – findings show that nearly half of people are likely to drink a cocktail of one type or another before a meal. It’s an area that’s ripe for developing a specialism and represents one definite route for making your venue special.

As such, bars need to look at stocking more adult soft drinks, together with the new wave of premium mixers in order to develop their non-alcoholic cocktail offering to maximise sales in this key growth area. ‘Ready-to-drink’ (RTD) products are still relevant, too, with a move away from sweet and sugary to new and innovative flavours: and there’s growth in ready-to-serve, ready-mixed cocktails – even cocktails on draft – that can drive additional sales for little additional cost, remove the need for skilled bar staff, whilst satisfying consumers who want to experience premium drinks.

So-called ‘shim’ drinks, which use sherry, vermouth, sake and port as lower-ABV alternatives to spirits such as vodka and gin are another trend that needs to be reflected in any low alcohol stocking and drinks list policy. Key to making a success of these toned-down ‘& tonic’ serve is to ensure that they’re made with as much care and skill as what might have been deemed ‘mainstream’ cocktails just a few years ago. It’s a profitable area for bars, too: tapping into the trend for Prosecco, a sparkling wine cocktail can generate over 45 serves from one 70cl bottle of liqueur.

As we’ve already seen, some marked trends are seemingly going in opposite directions, so, at the same time as the alcohol repertoire is being expanded into lower-ABV spirits, there continue to be any number of premium standard and high-ABV gin, vodka and tequila launches in the white spirits sector, as indeed there are in the whiskey, rum and brandy dark spirits sector, which are just as much part of the growth in the overall cocktail sector. In fact, it pays to understand that dark spirits account for some 60% of total premium spirits consumption, in spite of the significant rise in premium gin sales we’ve seen over the last few years. Although gin sales have increased by £500 million, to £1.6 billion – in one year alone – this only represents one-tenth of premium dark spirits consumption. Nevertheless, the arrival of many new distilleries with uniquely flavoured (and sometimes coloured) gins shows no sign of slowing down, opening up a whole new world of gin-based aperitifs and cocktail creations that can satisfy the most demanding and experimental of mixologists and consumers alike.

It would be wrong to ignore craft beers and ciders as these are also products consumed as aperitifs, particularly with brewers introducing lower-strength ales and lagers – even some products which, in historical times, would have been called ‘small beer’, coming in as they do at between 1% and 2.5% ABV. The marked growth in premium beers is mirrored by bottled craft dry ciders, also reflecting their provenance and vintage – and naturalness.

The UK drinks industry is known to be one of the most open and dynamic – and, therefore, competitive. Yet, because of this, there’s so much opportunity for a venue to carve out something different and special: it’s not solely about the product, but also a venue’s soul, and it’s the combination of these two elements that creates an overall experience that can create the basis of a special and commercially successful business.

Raise Your Brand's Profile by getting it reviewed by Top Trade Buyers.