The Trajectory of Maturing Japanese Dram

The world is adoring Japan for their craft in whiskey making and optimising the natural benefits the land offers. Read more about the ups and downs the market in Japan has gone through.

The Japanese whiskey industry has deeper roots than what the world thinks as few sake breweries started making whiskey in the early 1850s. Shinjiro Torii, one of the founding fathers of whiskey in Japan, started by making sweet wine in 1907 “Akadama Sweet Wine” that would suit the Japanese palate. It became an instant success and is still sold today.  He learned the craft of brewing and distilling and finally established the first whiskey distillery in Japan “Yamazaki” in 1923. The main aim was to use the natural local ingredients in a way that Torri had imagined. Eventually, in 1929, he launched the classic Suntory Whiskey “Shirofuda” which has now become the pioneer of quality whiskey from Japan.

Domestic sales of whiskeys rose up in the mid-1980s. However, the Japanese government at the end of the decade reformed the protectionist tax against imported spirits. Suddenly, a lot of high-quality imported whiskey became affordable. In addition to this, the economic crisis in the 1990s put a halt to developing this local spirit. As a result, in this period, plenty of distilleries shut down and the rest of them continued to distil but limited the volume.

Nonetheless, this domestically confined market rose when Bill Murrays’ character from a 2003 movie “Lost in Translation” advertised Suntory Whiskey by saying “for relaxing, time make it Suntory time!”. Since then, the international market has led eyes to this far-off country to discover the luxury spirit

Recently, the whiskey business has boomed within Japan and internationally. The Highball drink, a simple amalgamation of whiskey and soda, is now common in Japanese households.

As the global market flourished in Japan after 2003, plenty of local distilleries have come to light. Additionally, Suntory's Yamazaki 2013 Sherry cask was named the winner of “Best whiskey in the World” by the Whisky Bible in 2015. Taking advantage of the purest resources and undiscovered culture and heritage, these whiskeys portray the countries’ diverse flora and rich heritage. The absence of cereal in the background helps it to stand apart from the Scotch. 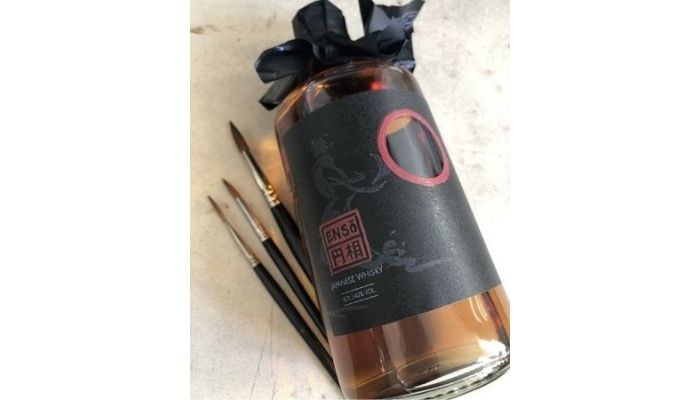 The Enso Blended Whiskey utilizes all these factors most appropriately. It won the Best in Show from Japan award at the 4th edition of the London Spirits Awards in 2021. It is distilled using the mineral-free water from the Akaishi mountains as it helps to avoid any interference with the whiskey expression. The Japanese oak, which is more porous comparatively, allows the liquid to get absorbed into the wood during hot summers. This infuses flavours and character to the whiskey and results in a well-rounded mouthfeel.

It is derived from Buddhist scriptures and translates to “circle”. The circle symbolises many things: strength, the circle of life, connection, letting go of expectations and the beauty in imperfection. It is used as a meditation practice and focuses on quieting the mind. The circle is hand-drawn with just one brushstroke and thus there is no possibility to perfect it. It is considered that the imperfections make the Enso beautiful. This concept is similar to Fukinsei which captures perfectness through asymmetry and irregularity. 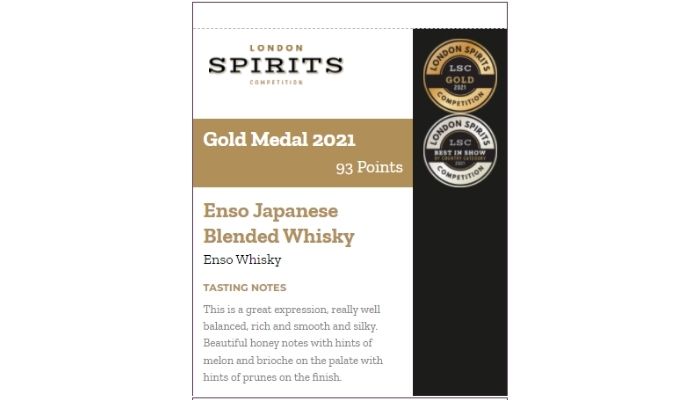 Spirits are judged on the basis of quality, value and packaging, Source: London Spirits Competition

We hope more and more Japanese whiskeys come to the western markets where they will be adored for their aromatic and mellowed flora flavours.