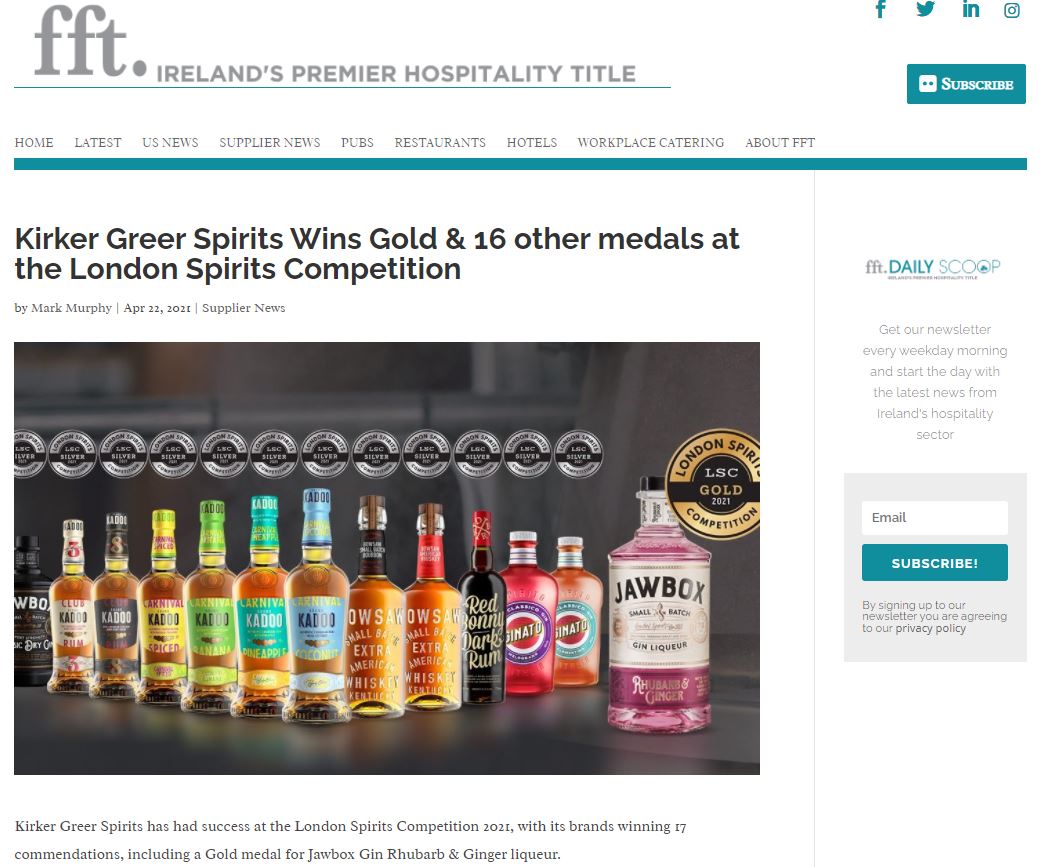 Kirker Greer Spirits have had success at the London Spirits Competition 2021, with its brands winning 17 commendations, including a Gold medal for Jawbox Gin Rhubarb & Ginger liqueur.

Now in its fourth year, the London Spirits Competition is an annual judging of international spirits organised by the Beverage Trade Network. The competition looks to recognise, reward and help promote spirits brands that have successfully been created to identify with and target a specific spirits drinker. 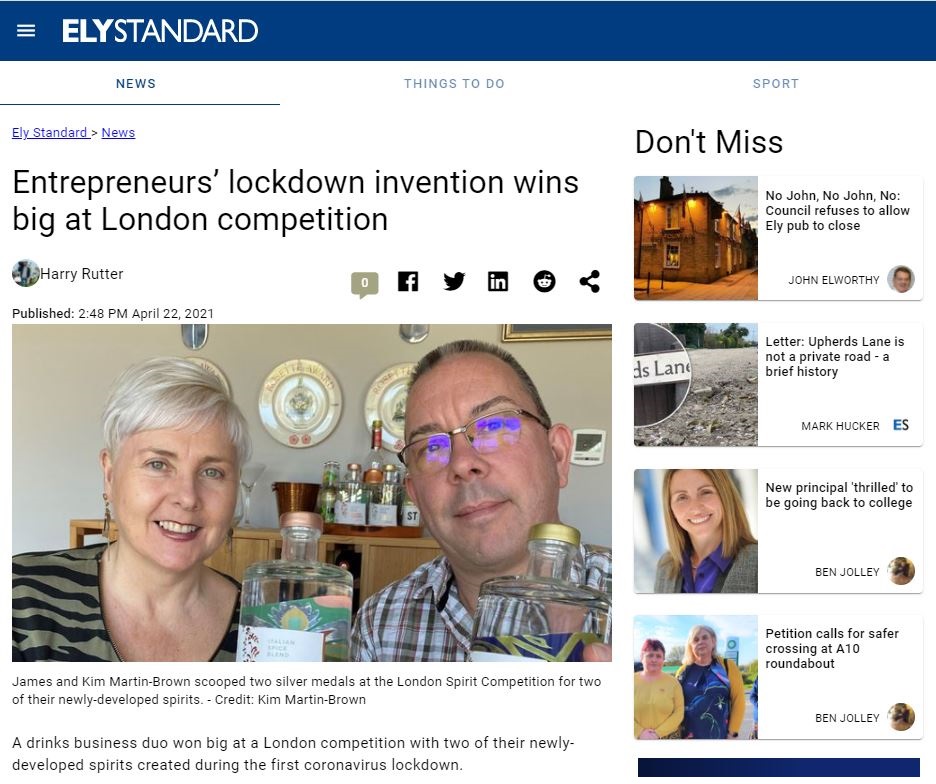 James and Kim Martin-Brown, owners of Martin & Brown whose drinks are created in East Anglia, scooped two silver medals at the London Spirit Competition. Kim, who was born in Ely and has several family members living in Little Downham and Pymoor, has strong deep-rooted connections to the local area. Her grandmother would cycle from Newmarket to Ely Sugar Beet Factory after her nursing shifts during WWII to test the beet for its sugar content.

The Italian Spice Blend and the Eastern Splice Blend drinks were the award winners for the couple, who live just outside of Chatteris. 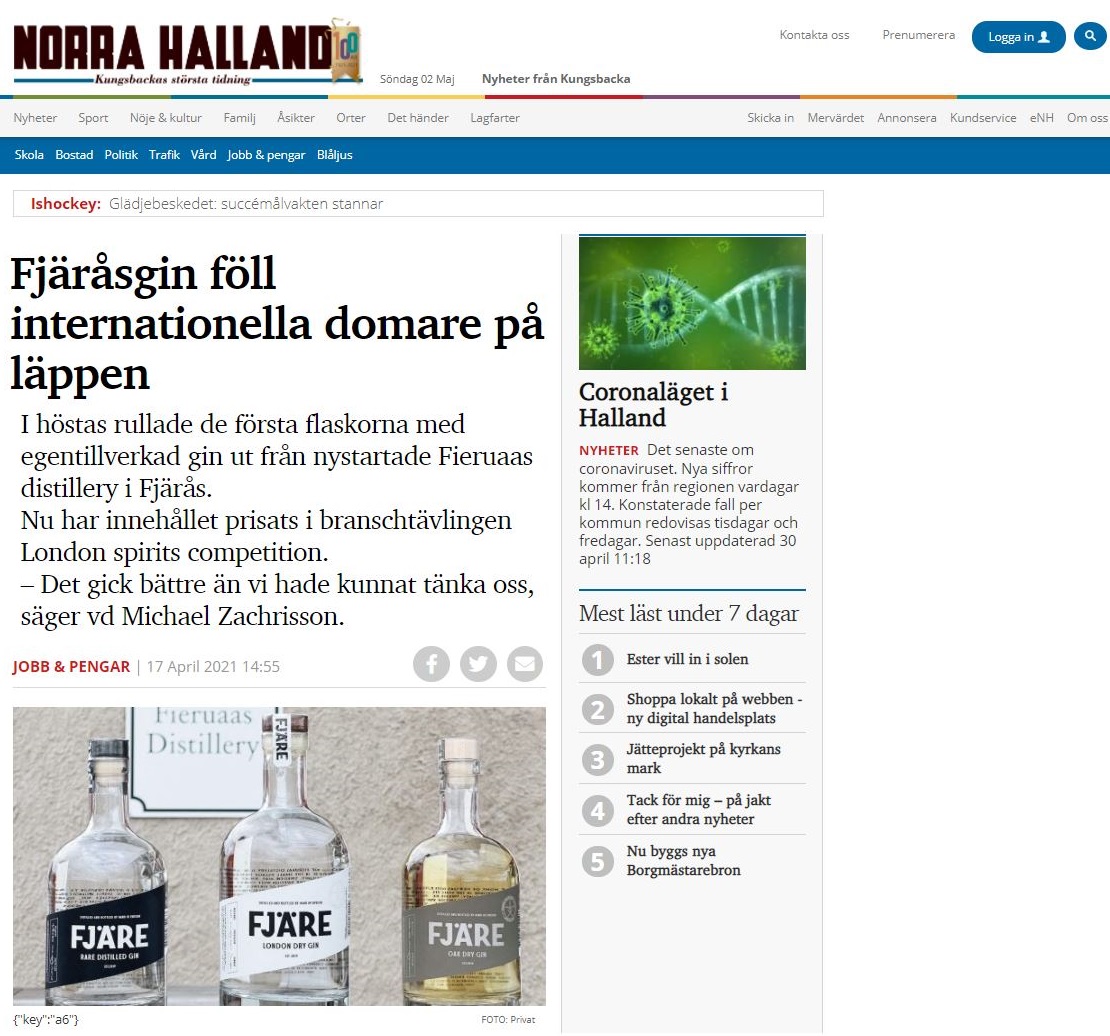 In the autumn, the first bottles of self-made gin rolled out from the newly started Fieruaas distillery in Fjärås. Now the content has been awarded in the industry competition London spirits competition. It went better than we could have imagined, says CEO Michael Zachrisson.

Craft distillery, Michael himself calls the business in Fjärås, where the gin is made. It's not a large-scale production, nor is it the point. So far we have produced 10,000 liters but the capacity is 150,000 liters of gin per year. It covers our needs so far, says Michael Zachrisson. 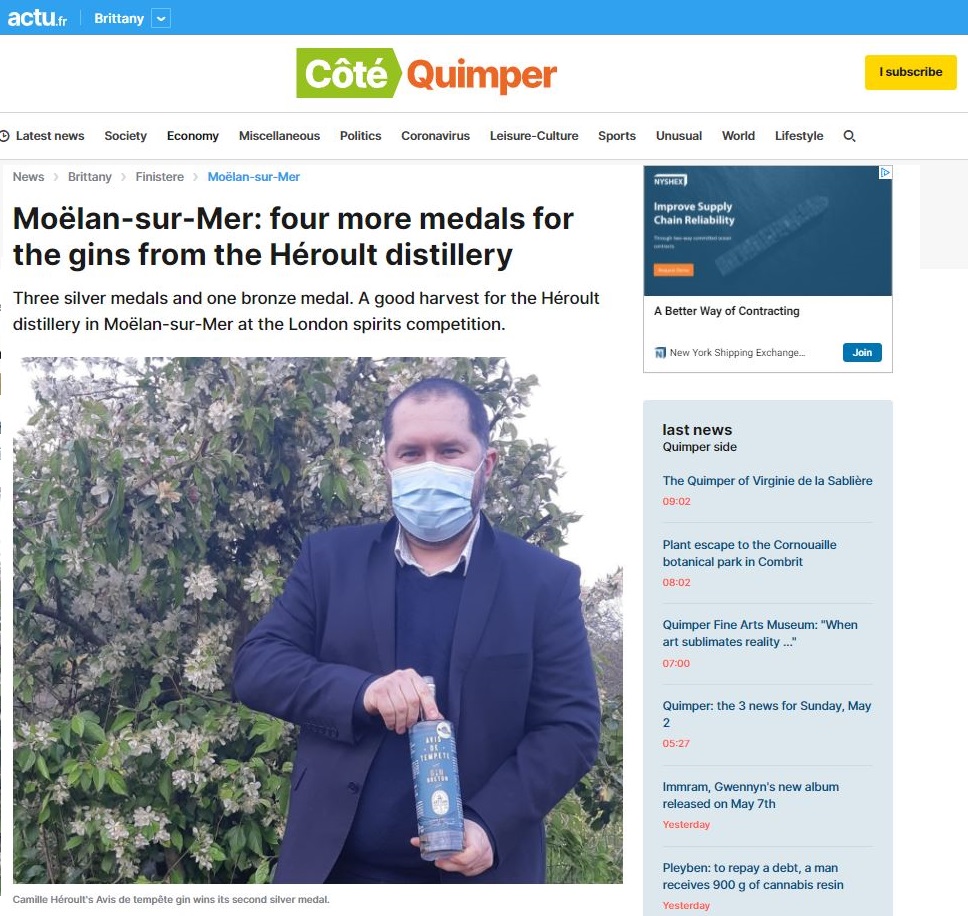 The Héroult distillery in Moëlan-sur-Mer ( Finistère ) was once again distinguished at the London spirits competition, a prestigious European competition that rewards the best spirits. In 2020, for her first participation, Camille Héroult brought home a silver medal for her Avis de tempête gin. This year, its entire range was recognized: a silver medal for Avis de tempête, but also for the short-lived Fall and Winter recipes, and a bronze medal for the Abysse gin. 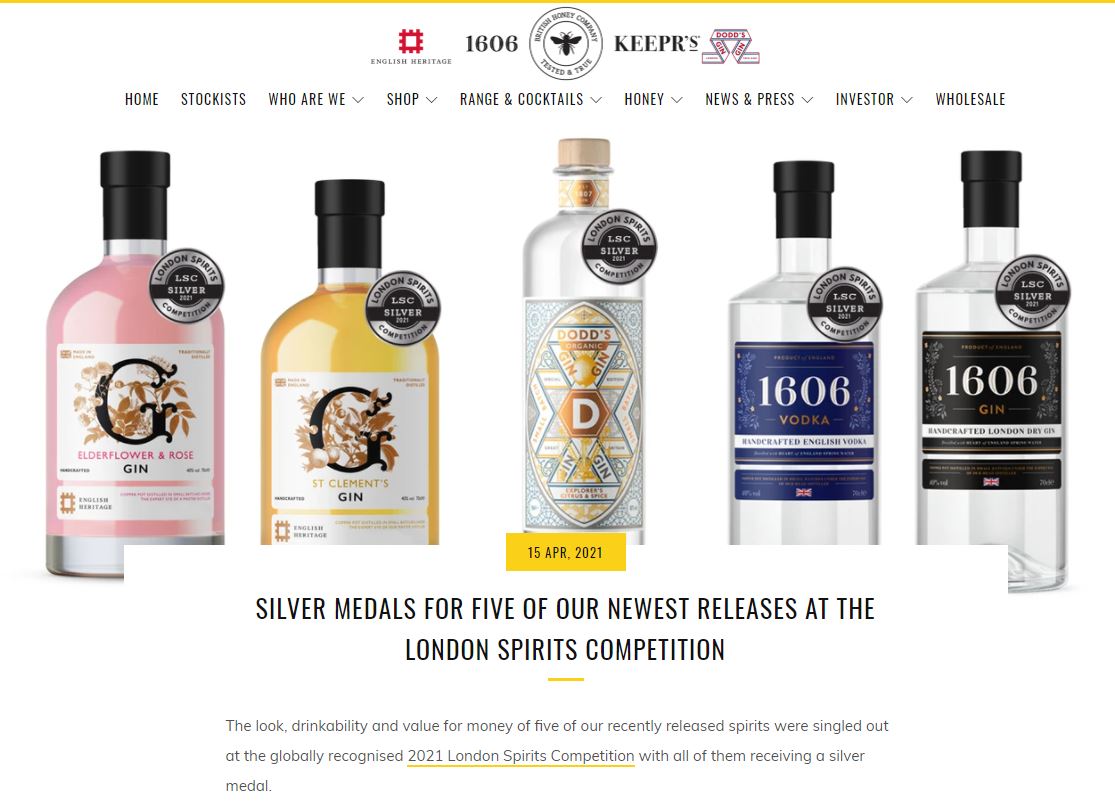 The look, drinkability and value for money of five of our recently released spirits were singled out at the globally recognised 2021 London Spirits Competition with all of them receiving a silver medal. Commercial Director, Oliver Williams, said: “We are thrilled to kick off our 2021 awards success with these five medals.

“The London Spirits Competition recognises brands that consumers really want to buy in that they are enjoyable, easy to drink, provide value for money and have an appealing design. 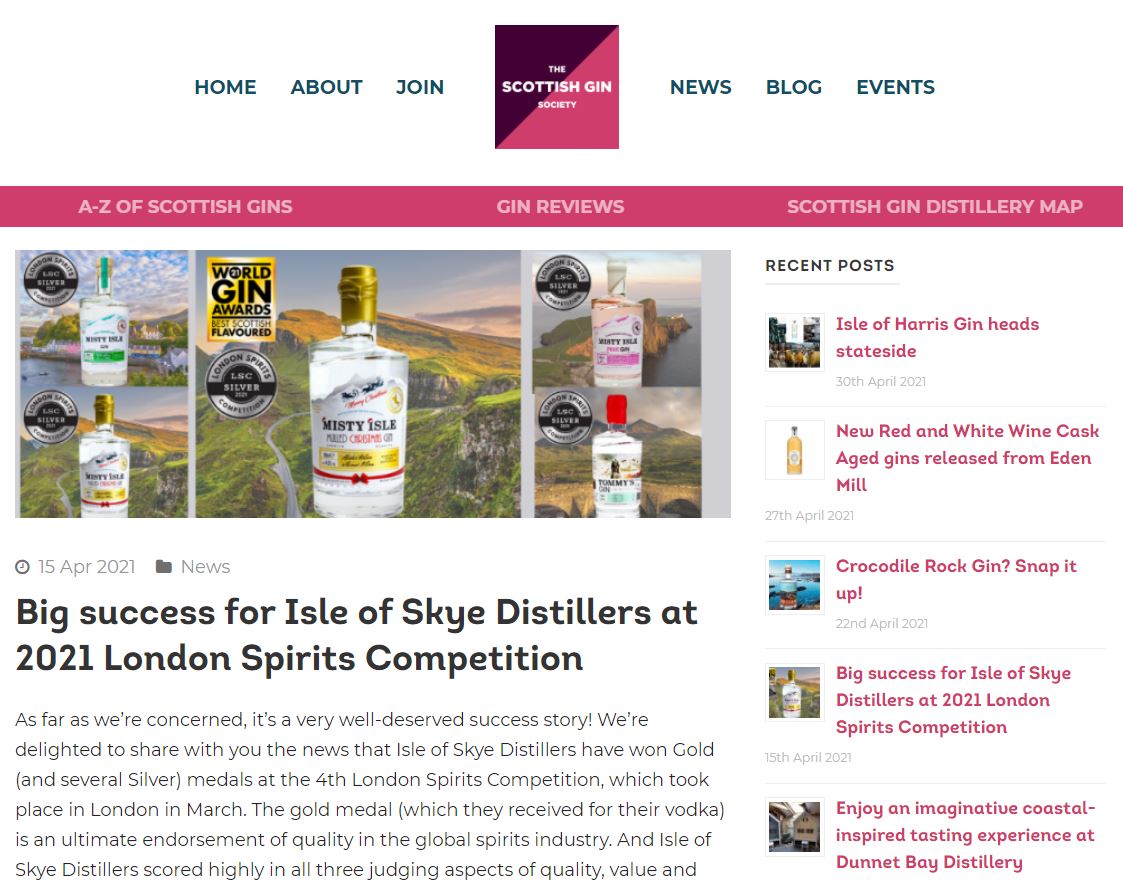 As far as we’re concerned, it’s a very well-deserved success story! We’re delighted to share with you the news that Isle of Skye Distillers has won Gold (and several Silver) medals at the 4th London Spirits Competition, which took place in London in March. The gold medal (which they received for their vodka) is an ultimate endorsement of quality in the global spirits industry. And Isle of Skye Distillers scored highly in all three judging aspects of quality, value and packaging. 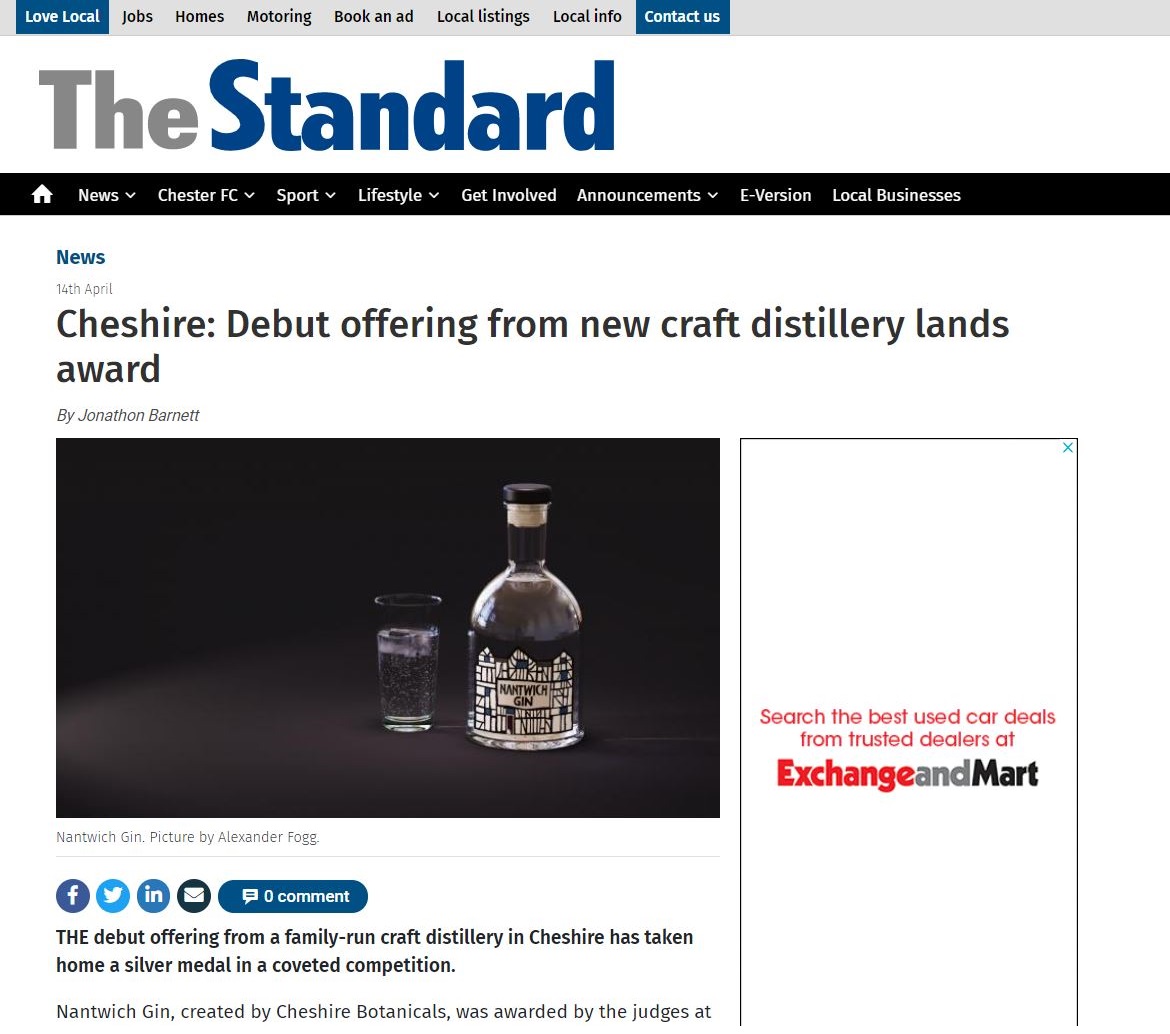 Nantwich Gin, created by Cheshire Botanicals, was awarded by the judges at the London Spirits Competition 2021. It’s the first industry accolade for the new distillery, which launched barely six months ago in November 2020, and represents an ultimate endorsement in the global spirits industry. The gin scored highly across the three key judging criteria of quality, value and packaging. 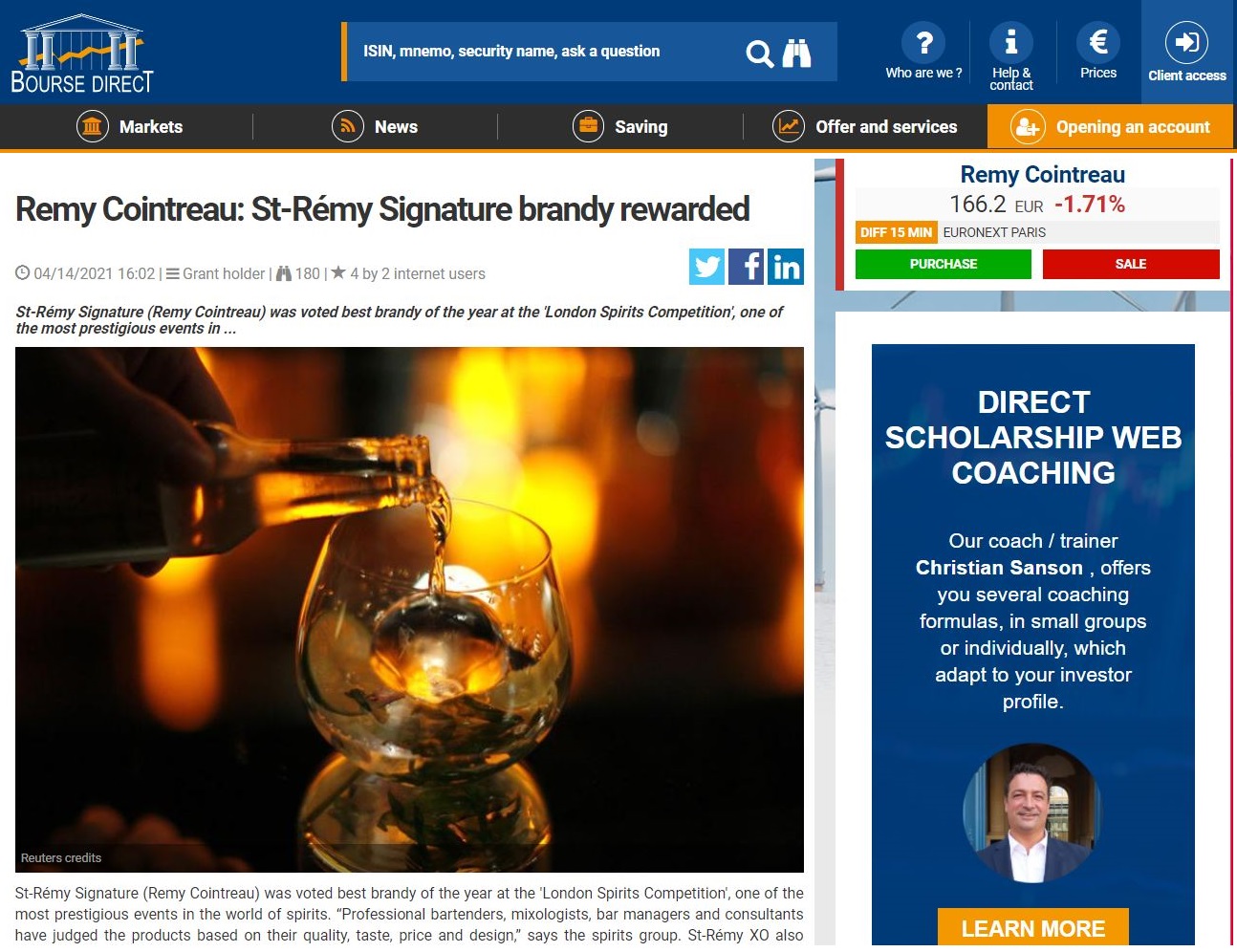 St-Rémy Signature (Remy Cointreau) was voted best brandy of the year at the 'London Spirits Competition', one of the most prestigious events in the world of spirits. “Professional bartenders, mixologists, bar managers and consultants have judged the products based on their quality, taste, price and design,” says the spirits group. St-Rémy XO also received a gold medal. 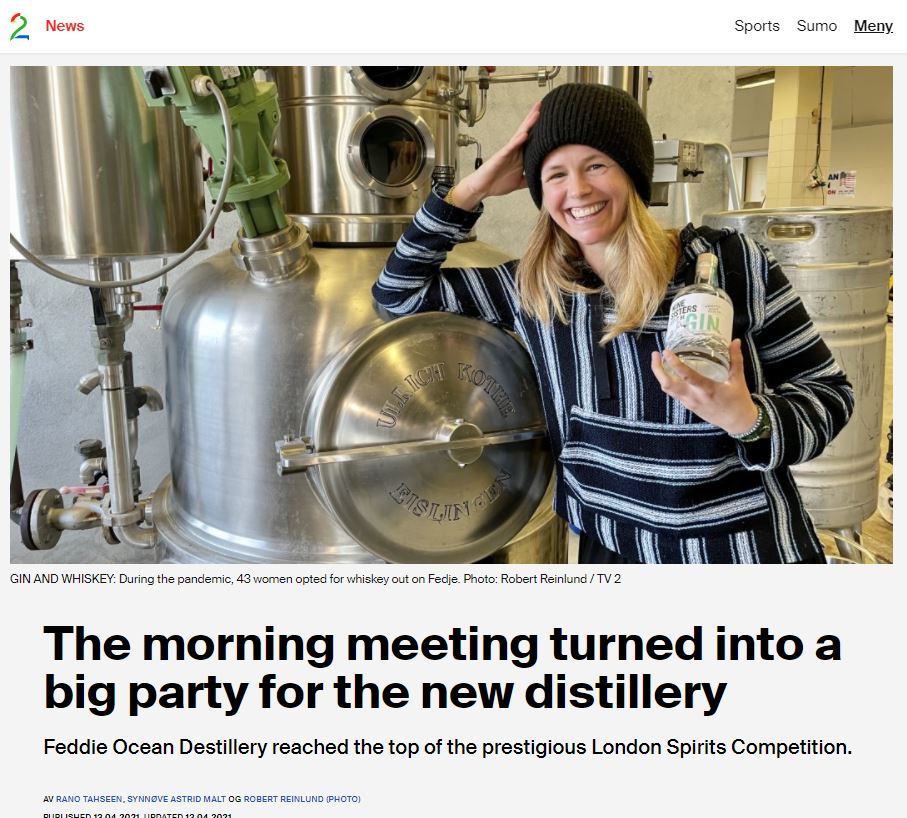 Feddie Ocean Destillery reached the top of the prestigious London Spirits Competition. The distillery produces both gin and whiskey. The plan was that it would be a regular meeting today, but it degenerated quickly, says distiller Therese Storebø Østervold. The distillery reached the very top in the prestigious London Spirits Competition, which rewarded the company with a gold medal for its gin. 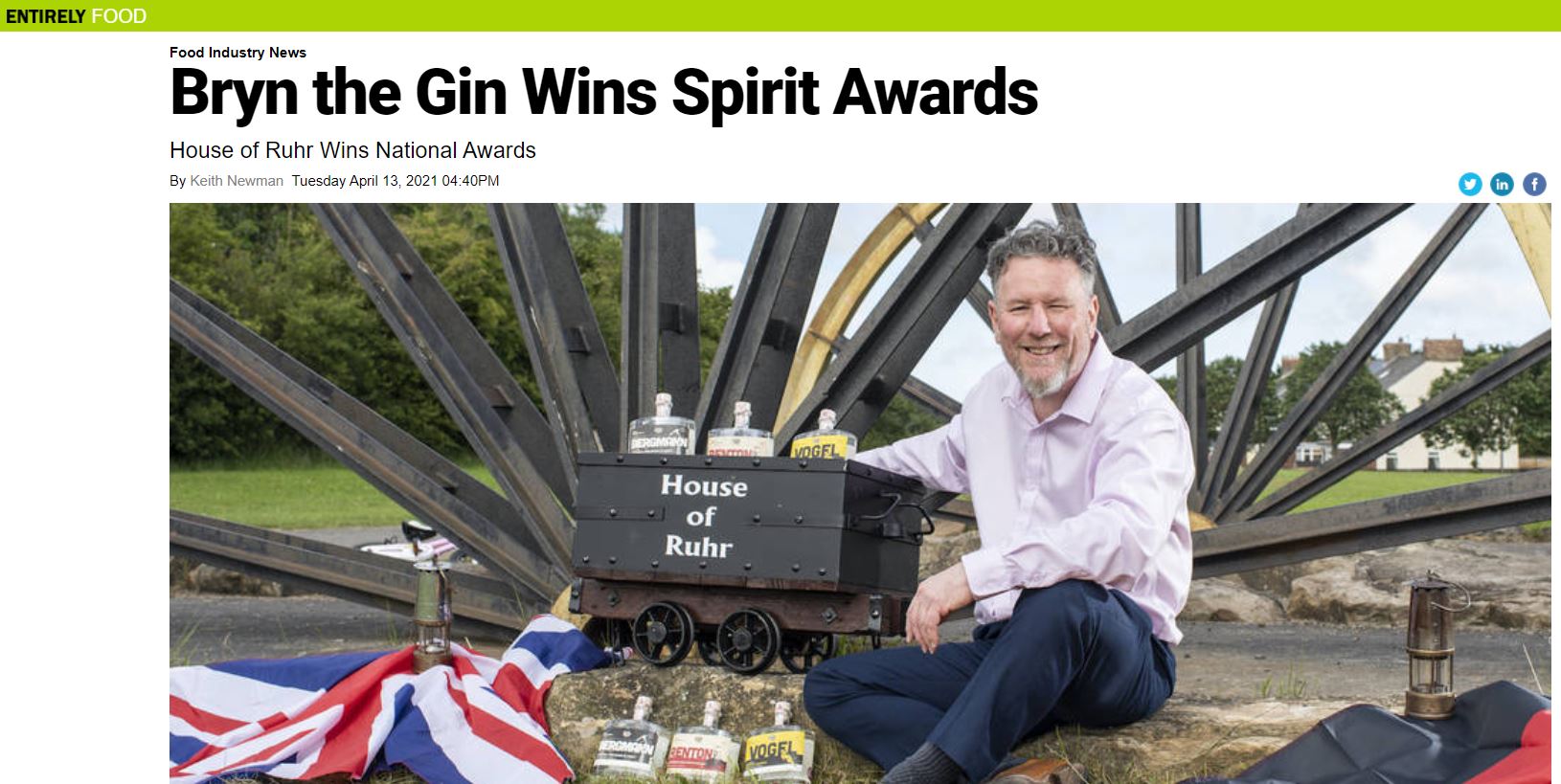 Wearside based Gin distributor; House of Ruhr has won silver medals at the 4th London Spirits Competition. The medals are an ultimate endorsement in the global spirits industry. House of Ruhr’s Bergmann, Renton and Vogel gins scored highly in the three judging categories of quality, value and packaging.

"We are pleased that our Bergmann, Renton and Vogel gins performed so well at the competition." - Bryn Jones 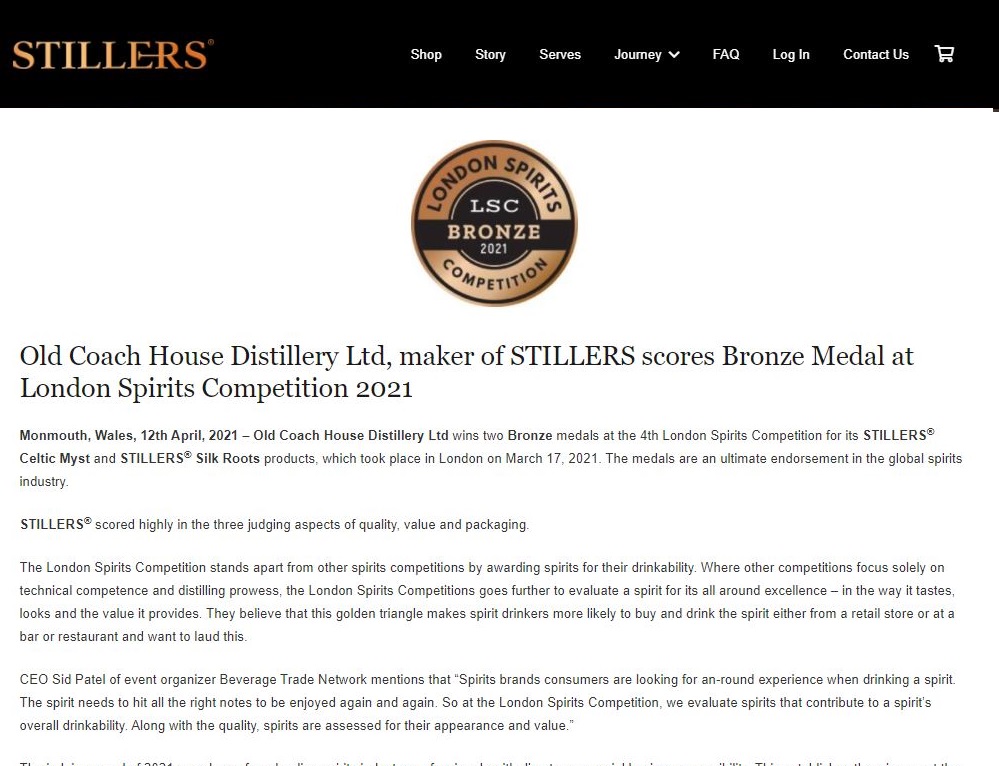 “The extremely qualified judges, the chance to compete with thousands of excellent spirits from around the world and the stringent judging criteria of quality, value and packaging makes an award from the London Spirits Competition a coveted one. We are pleased that our STILLERS® brand performed so well at the competition,” said David O’Brien, Master Distiller.

“This Bronze medal demonstrates that the drinks we are making are the kind that bar managers and mixologists want to stock and spirits drinkers enjoy drinking.” 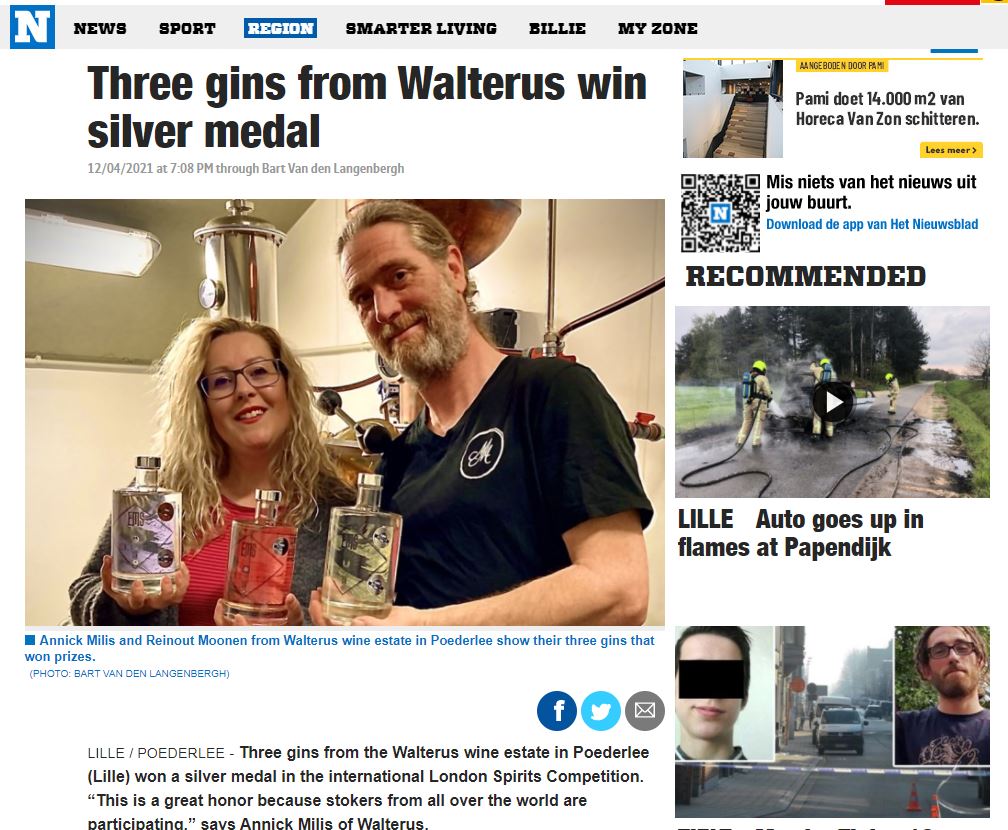 Three gins from the Walterus wine estate in Poederlee (Lille) won a silver medal in the international London Spirits Competition. “This is a great honour because stokers from all over the world are participating,” says Annick Milis of Walterus. Winegrowers Annick Milis and Reinout Moonen van Walterus have achieved excellent results for the second year in a row at the London Spirits Competition. 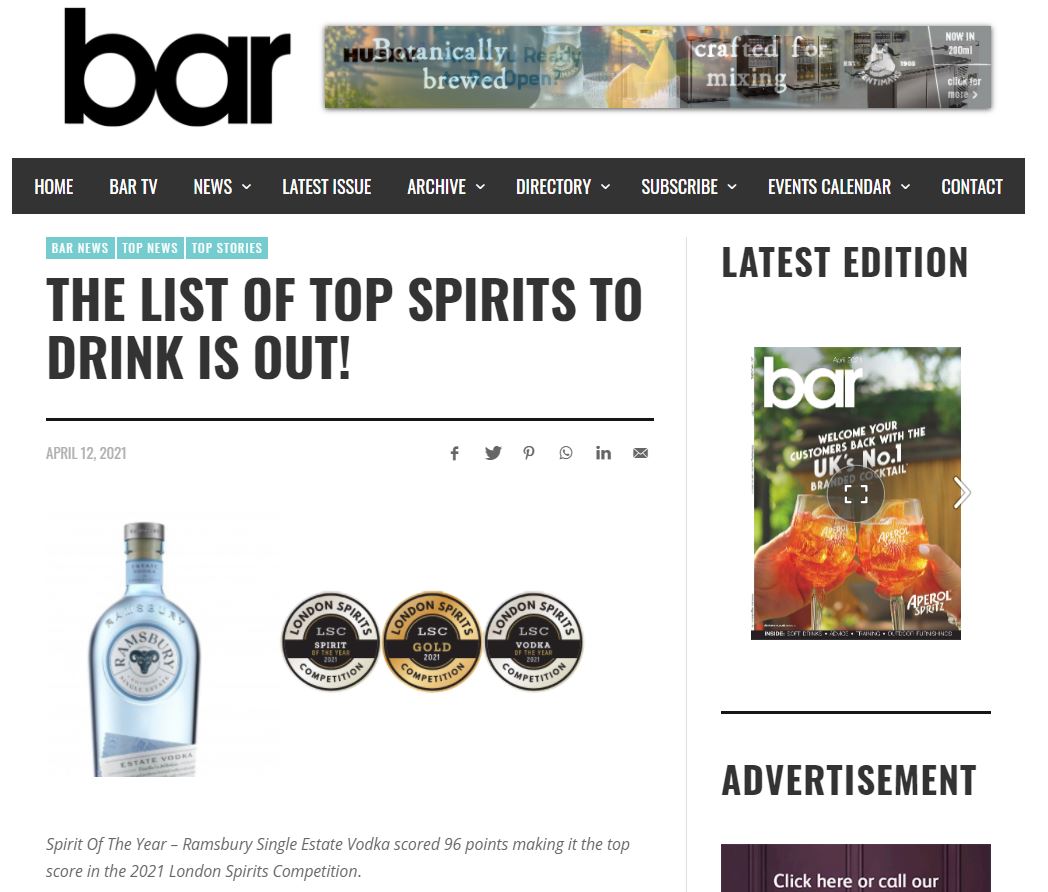 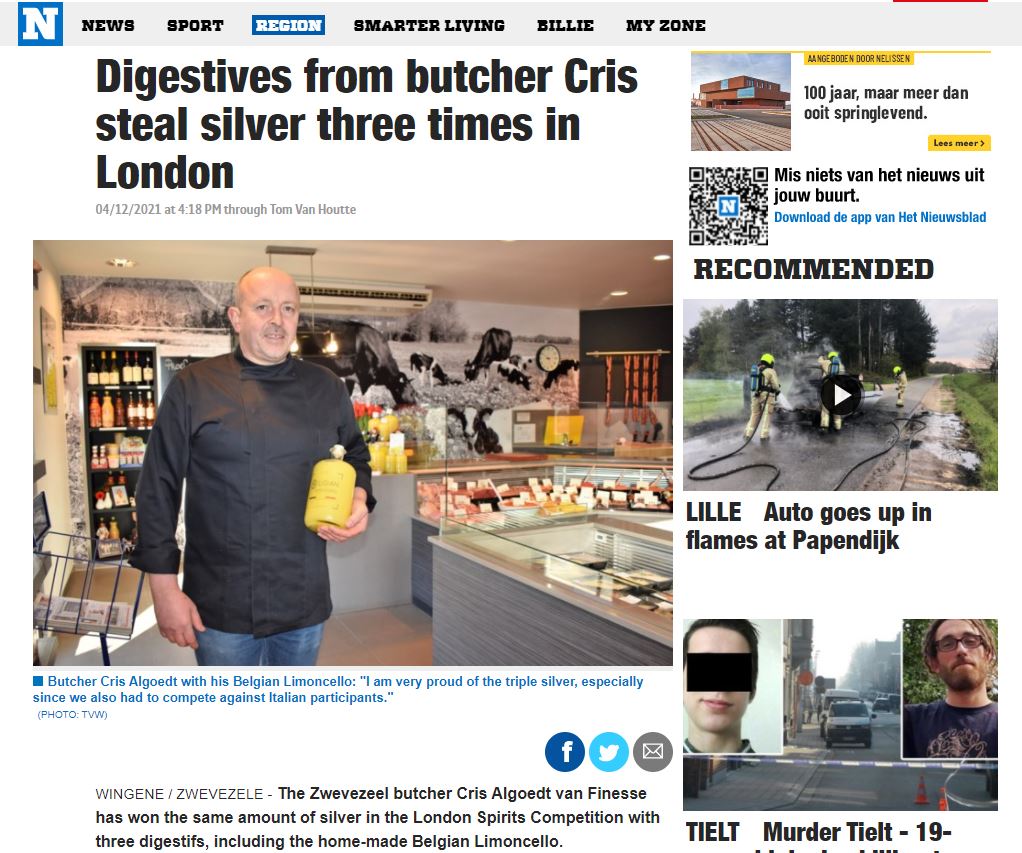 The Zwevezeel butcher Cris Algoedt van Finesse has won the same amount of silver in the London Spirits Competition with three digestifs, including the homemade Belgian Limoncello. Butcher Algoedt has been commercializing its own limoncello for two years now.