VII Hills is the "revolutionary" Italian Dry Gin that is changing the way you are enjoying your aperitifs. They have taken the original Italian taste and they are spreading it all over the world.

Their mission is simple: They want to change the world, the world of the aperitifs. They want to make you enjoy the aperitif with style. VII  HILLS honours the Italian culture and traditions, like the Aperitivo.

VII HILLS Italian Dry Gin is an aromatic and fruity juniper spirit, lightly citrusy on the nose. On the palate, sweet pomegranate notes with hints of Roman chamomile, perfectly balanced by the earthy freshness of the celery. 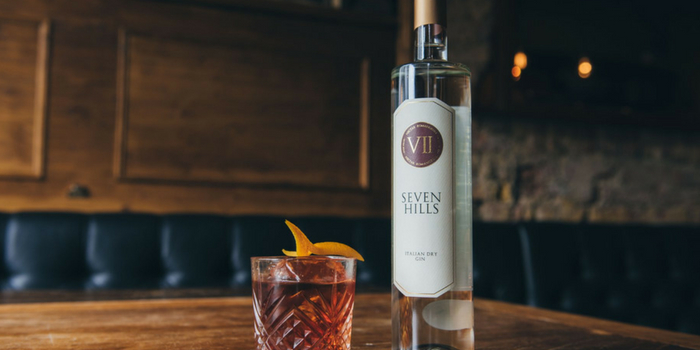 Gold Winner at London Spirits Competition- VII Hills Italian Dry Gin was released in (AKA - 2014), and is made using a combination of seven botanicals - juniper, celery, rose hip, artichoke, blood orange, chamomile and pomegranate who also have their own historical significance as below.

Juniper was used to cure diseases and over the centuries it has been used as a diuretic, an antiseptic and a cure for digestive problems. The Romans valued it more for cooking than for religion, although many superstitions were connected with it. The Romans also thoughts that celery could prevent the hangover.

The full flower was used as an ornament, with its petals to aromatise wine and to produce therapeutic rose oil. Chamomile tea was used by the Greeks, Romans, and Egyptians as a salve for wounds to expedite healing is known for its anti-inflammatory, antimicrobial and antioxidant effects.

Oranges were occasionally depicted in Roman art,  being a symbol of wealth and fertility. Ancient Romans considered it a delicacy and an aphrodisiac. The artichoke was also attributed to being effective in securing the birth of boys. Known in Latin as "seeded apple”, the pomegranate was grown in the “hortus” and considered a medical healing and symbol of fertility.

VII HILLS wants to celebrate its recipe with the flavours, the traditional Italian methods and reveal the importance of old rituals. VII HILLS Italian dry gin is made in Moncalieri (near Torino), by Vergnano family: the master distillers distil VII HILLS with the same traditional manners as hundreds of years ago.

VII HILLS is created following the methods that give to it the body, the strength and the unique Italian flavour.

The Roman botanicals after sourced and infused in a hydro-alcoholic solution, are distilled with a sugar beet neutral spirit in a vacuum pot still. Pomegranate, Roman chamomile and celery are then added to give VII HILLS a traditional Italian accent.