Why Make Tonic When You Can Make Gin

Gins made especially for Negroni and Martini by this brand are taking over the gin market. Check out this unusual gin brand which infuses a bundle of spices that will tingle your taste buds.

After establishing the distillery in 2013, the company released the Four Pillars Rare Dry Gin in December 2013 which won the Double Gold at the San Francisco World Spirits Competition in 2014, silver medal at the London Spirits Competition in 2021 and many more because of its trademark use of whole fresh oranges and the blend of Asian spices. After such success of their handcrafted gin they went on to release more and more variations of the spirit and numerous accolades followed. In 2014 they decided to make the Bartender Series Gin; the idea struck Cameron (head distiller) and Jason Williams, one of the top 10 bartenders, as they wanted to elevate the drinking experience of Gin’s staple cocktail - Negroni.

Thus, to cut through the bitterness and vermouth, Cameron shortlisted a few botanicals like Tasmanian pepper berry leaf, cinnamon, Grains of Paradise from West Africa and Indonesian cubeb. Apart from these, the bouquet also embraced the presence of lavender, green Cardamom, star anise, cassia and juniper from Macedonia.

The company showcased this proudly distilled handcrafted gin to the world in 2014 and it took the gin world by storm. After dominating all the major competitions across the globe, in 2021, Four Pillars Spiced Negroni Gin won the gold medal at the London Spirits Competition. The bouquet of spices in the gin made its way to the hearts of the judges at LSC.

Four Pillars import their botanicals from different parts of the world 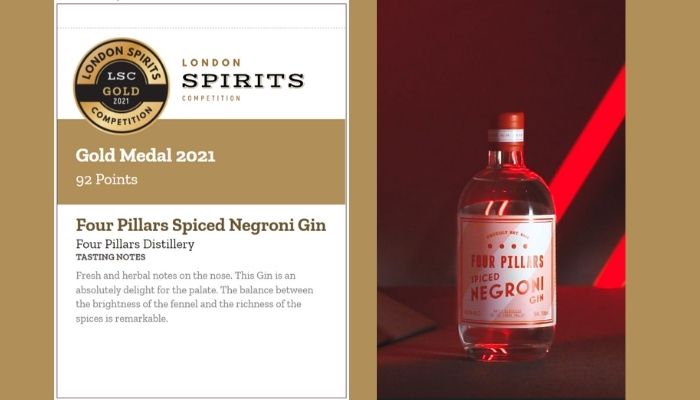 Review of the Four Pillar Spiced Negroni Gin at the 2021 London Spirits Competition.

Tasting notes: Fresh and herbal notes on the nose. This Gin is an absolute delight for the palate. The balance between the brightness of the fennel and the richness of the spices is remarkable.

The spiced gin was not the only showstopper at the London Spirits Competition. Its newest cousin, Four Pillars Olive Leaf Gin also won the same award at this competition. The company is amorphous when it comes to experimenting with new fields which really reflected in their portfolio. Martini is a flawless example of how delicious the marriage of gin and olive is which was thoroughly known to the trio when they first made a limited edition of  Cousin Vera Gin in collaboration with Santamania Distileira in Madrid. Even after six years, their hangover for savoury gin was not cured yet hence, they started experimenting with olive oil along with dried olive leaves and the local botanicals. They filtered a few botanicals out of their spice library which included rosemary, bay leaf, macadamia nuts and the local hero, lemon myrtle.

Released in August 2020, similar to its cousin, the gin shook the market and grabbed plenty of honours and the London Spirits Competition was no exception. 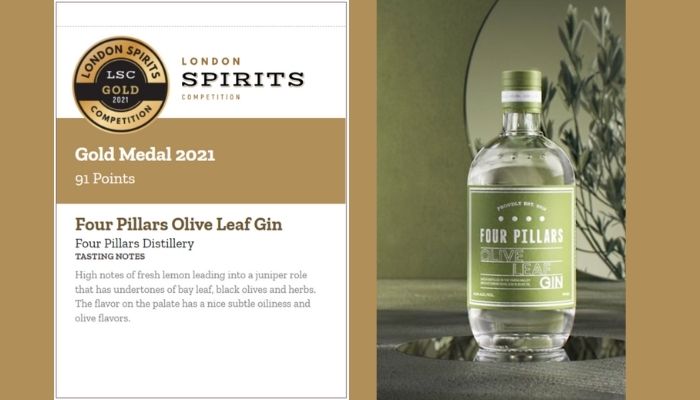 Review of the Four Pillar Olive Leaf Gin at the 20201 London Spirits Competition.

Tasting notes: High notes of fresh lemon leading into a juniper role that has undertones of bay leaf, black olives and herbs. The flavour on the palate has a nice subtle oiliness and olive flavours.

Legends of the Australian wine industry, Cameron Mackenzie and Stuart Gregor were eager to take on a new adventure and build something of their own. The initial thought was to make tonic water, but “who wants to make a soft drink ?”. In less than 72 hours, the duo shifted their business idea and decided to craft gin and this transition was seemingly fluid and none of them had any aberration from the thought of making Gin. As Australia is known for its pure raw ingredients and freshest botanicals, distilling a gin incorporating such resources would be an ideal decision and 90% of the gin that Australians drink is imported, so why not create an industry here itself? 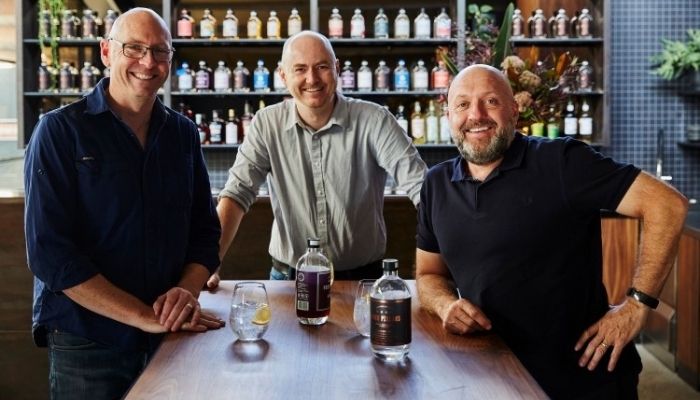 The duo met a brand strategist Matt Jones, the third partner of Four Pillars Gin and apart from baldness, the three partners also share a common interest in starting their own business. To step into this business they had to learn the basics and for this Cam and Stuart went on a learning trail on the US West Coast. All the US gin manufacturers had the same Carl German-engineered copper still and so they also decided to get one and named it after Cams’ late mother Wilma. Meanwhile, Matt was on the floor thinking about strategies and finding ways to take inspiration from and guide them forward as a brand. 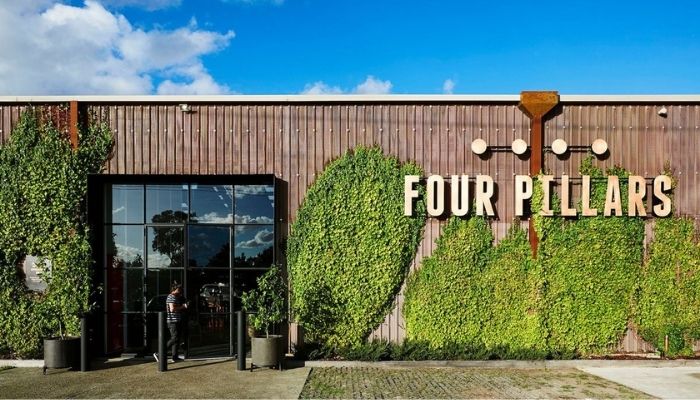 The Yara valley is known for the wine industry in Australia, Source: TheCEOMagazine

In 2015, they expanded their distillery and moved to a property in Healesville, Yarra Valley which was once a timber yard. The number of pot stills has increased and now  Wilma is accompanied by Jude, Eileen, Beth and Coral all manufactured by Carl in Germany which gives the brand enough room to keep experimenting and at the same time deliver their flagship products to the never-ending consumer demand. The property has a dedicated tasting room and Cameron conducts Gin tastings and distilling masterclasses to engage the people visiting the distillery. No doubt Four Pillars distillery has become Australia's number 1 Gin Brand.